Made in Hong Kong, a country in the vanguard of robotic advancement, Mip Robot is a responsive and curious small robot, that communicates his personality by using sounds, movement and his RGB LED eyes. With its appealing appearance and cute voice, it will charm its way into children and adult hearts. Here’s a few other things you should know about this robot.

MiP Robot has 10.2 inches height, 6.8 inches width and 5 inches depth. With this measurements, the toy can easily adapt to any environment without taking up to much space, and will be able to maneuver its way through any house or apartment with no problems. Also, the robot weights only 10.6 ounces, making it ideal to transport it from room to room when it’s not on. It is recommended for children from 8 years through 15 years of age, although adults will enjoy it as well.

The robot has a unique dual-wheel balancing system, which makes it stable as it moves around its surroundings. The dual wheel also makes it able to follow objects around, and since it recognizes hand gestures, it is be able to follow hand given instructions as well. MiP Robot can also balance several objects at the same time on its tray, an accessory included in the package, while standing still or while moving, and is able to turn around 360 degrees swiftly on its wheels.

The toy requires 4AAA batteries to work, and can be connected to a Kindle or smart phone to enhance its functions. It comes with different robotic modes, which include Roaming, Stacking, Dancing, and Programming; it’s versatility makes it interesting to play with.

Most reviewers are very happy with MiP Robot, saying that children spend hours at a time playing with it and that they love the toy. Moreover, they state that changing from mode to mode is not complicated even for the youngest children, since they are color coded; kids will memorize what each mode does easily because of this. Also, users claim that the ability to connect the robot to a phone or tablet makes a huge difference in the toy’s functionality, with different apps designed specially for it making it much more entertaining.

Some reviewers complain about the fact that the robot needs batteries to function, instead of being rechargeable via USB. According to them, the robot uses up the batteries very quickly, so having to change the batteries so often is something they are not happy about. However, users found a way around this by buying either rechargeable batteries or lithium batteries for the toy, so as to not spend as much money on that.

If you are looking for an excellent price-quality Robot for your kids to play with, with various modes and moods that make interacting with it a delightful experience, then this might be the right toy for you. Find out more about MiP Robot here. 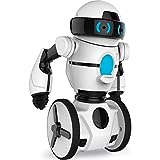 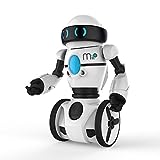 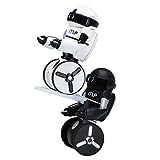