Sony’s DVP-FX980 9-Inch Portable DVD Player is the company’s 800×480 high resolution widescreen player, with 4 hours battery life and excellent image quality. At only 3 pounds weight, you can easily take the player with you wherever you want and play DVDs from all regions, plus music and pictures, at the palm of your hand. Here’s a few other things you should know about this player.

FX980’s screen is a great asset to this DVD player, at 800×480 high resolution, since most portable players do not have such a high output; you will be able to watch your favorite films or tv shows in outstanding image quality and sharpness. Also, the 9 inch screen allows a 16:9 aspect radio, which gives you the ability to watch movies in the format they were intended to be watched in.

FX980 player supports a large number of files and formats, such as DVD, DiVX, MP3, AUDIO CD, XVID and AVI Playback; you can not only watch films and tv shows, but also listen to music or display pictures. Plus, it has easily accessible touch keys that are placed around the screen’s frame, on a bezel which let’s you use them comfortably. Moreover, FX980 has 2 built in microphone jacks, so you can listen to music or watch movies without disturbing other people, or share with friends and family.

Battery life in this player is around 4 hours, which means you will be able to take it with you on your commute without having to worry about recharging it. It comes with a home charger, a car charger, an AV cable for you to plug the player into a TV set, and a remote control.

Reviewers of this player are generally very impressed with how the player looks and with the quality of the performance. Some users had issues with the Fast Forward and Skip buttons, claiming that the buttons sensitivity makes it easy to skip accidentally instead of fast forwarding or the other way round. However, users also say they got used to the button sensitivity quickly.

Other reviewers complain about the amount of battery life this player has, considering that 4 hours is not good enough for a portable DVD player. Others complain about the short cable cord of the home charger, stating that sometimes it allows either watching or charging, but not both at the same time. Regardless of this minor complaints, most users are impressed by the picture and sound quality, stating that the 9 inches diagonal display at this resolution is great, superior to other similar players and at a much more accessible price.

If you are looking for an excellent price-quality value for a portable DVD Player, with excellent image quality, sound and price value, then this might be the right one for you. Find out more about Sony DVP-FX980 9-Inch Portable DVD Player right below. 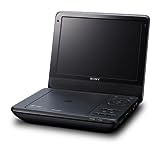 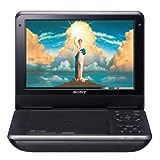