LEGO Star Wars 75054 AT-AT Building Toy is modeled after the Galactic Empire’s AT-AT (All Terrain Armored Transport) from the famous movie franchise. You can make this war machine from Star Wars: Episode V – The Empire Strikes Back! move it’s legs for posing, tilt it’s head for aiming spring loaded shooters, open the side hatches, or trigger the trap door in the body to maximize the usage of the toy. Here’s a few details you should know about this Building Toy.

LEGO Star Wars 75054 AT-AT Building Toy has 18.9 inches height, 14.9 inches width and 2.8 inches depth. It is recommended for children from 9 years through 14 years of age, although collectors and adults might also be interested in it due to its high details and incredible design.

Star Wars Building Toy AT-AT weights 3.4 pounds so you can move it around easily, and it comes with features such as a movable head, a cockpit that fits 2 figures and has removable spring-loaded shooters, an opening body that has a trap door that can be operated by a switch, and possible legs. It also comes with 5 assorted weapons that include 3 blaster riffles and a blaster pistol, an electro binoculars element, an AT-AT Driver, a Snow Trooper commander and 2 regular Snow Troopers. All of this details contribute to make this a very seeked for Building toy from Lego.

Reviewers are generally very happy with Star Wars 75054 AT-AT Building Toy, saying that the final result is impressive, with several interesting details to it; one reviewer loved the hydraulic leg connection, another reviewer loved the fact that the spring-loaded missiles actually can be fired far away, etc.

Users say although the instructions are clearly written and the bags of parts are easily identifiable, the complication of the assembly process might be a little too complicated for some kids to do on their own. Reviewers claim it takes from 2 to up to 4 hours to assemble the complete toy. Some reviewers also claim that some parts of the toy fall off when it is moved, while others state that even when children are moving it around from room to room, everything stays in place. However, most people have concerns regarding the price tag, finding it to be a bit high for a toy, but this does not stop them from praising this item. In general, there seem to be very little complaints from users, many of them highly recommending this Building toy.

If you are looking for a great building toy that your kids will enjoy building, or if you yourself are a massive Star Wars fan and want to add one more thing to your Star Wars collection, then this might be the right Building Toy for you. Find out more about LEGO Star Wars 75054 AT-AT Building Toy here. 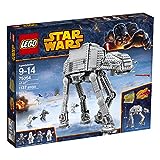 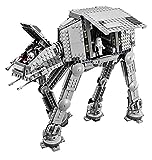